Use Model-Based Design with MATLAB and Simulink to simulate the robot and control systems, implement real-time prototypes, and generate code for production systems

“Model-Based Design is essential to our ability to innovate because it lets us develop new capabilities and deploy them quickly. We can rapidly build a prototype, show that it meets requirements, and then perfect it as we move into the product development phase.” 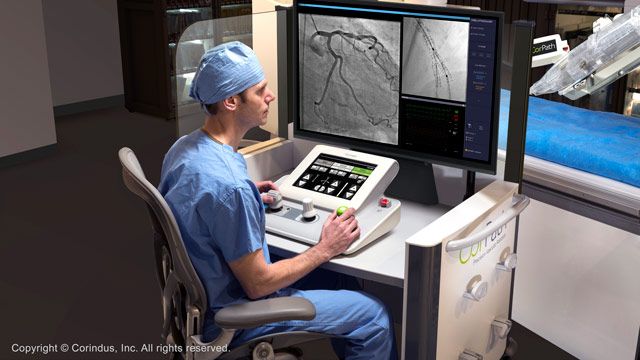 For patients suffering from an acute heart attack or stroke, quickly getting to a physician capable of performing the necessary intervention is essential. Unfortunately, not all hospitals have physicians trained to perform percutaneous coronary intervention (PCI) or neurovascular intervention (NVI) procedures.

Corindus has developed and deployed a robotic platform that makes it possible for a physician to perform PCI and potentially NVI procedures on patients located hundreds to thousands of miles away. It was recently used to perform the first in-human, telerobotic PCI. The platform is an extension of the company’s CorPath® GRX System, which was developed to reduce physician radiation exposure by enabling the physician to operate from a shielded workstation in the catheterization lab while providing robotic precision for patients. Corindus used Model-Based Design with MATLAB® and Simulink® to create CorPath GRX and to add support for real-time transmission of video and control data.

“The CorPath platform enables physicians to do something that they normally cannot do, and that’s be in two places at the same time,” says Per Bergman, Vice President of Research and Development at Corindus. “Model-Based Design enabled us to verify the platform design through simulation, reduce development iterations, and rapidly develop a proof-of-principle system for the world’s first telerobotic PCI.”

For the original CorPath GRX System, the Corindus team wanted to accelerate development by validating their robotic control design through simulation before committing to hardware. They also wanted to verify the design via real-time simulation and testing and implement it on an embedded microcontroller.

To add remote capabilities to CorPath GRX, the team needed to send fluoroscopy and hemodynamics video data from the patient’s location to the physician in real time and send joystick and other control data back. To ensure patient safety, the data had to be transmitted with high reliability and low latency.

After verifying the controller design through closed-loop simulations, the team created a prototype for in vivo testing and rapid control prototyping, using Simulink Coder™ and Simulink Real-Time™ to generate a real-time application from the model and run it on a Speedgoat real-time PC that interfaced with the actual robotic device.

For the production version of CorPath GRX, they generated C code for TI’s Piccolo™ microcontroller using Embedded Coder®. In addition to verifying this code through testing on the target, the team performed code coverage analysis with Simulink Coverage™ and static code analysis with Polyspace Bug Finder™. They included the results of these analyses in their submissions for FDA clearance.

To incorporate telerobotic capabilities into the CorPath platform, they built a communication link that sends video data and control commands between the remote and local sites via two Speedgoat target computers running Simulink Real-Time.

On the local (patient-side) Speedgoat system, they captured HD hemodynamics and fluoroscopy video data via a USB interface with Image Acquisition Toolbox™ and used a CAN interface to send commands to the GRX robot.

The remote (physician-side) Speedgoat system receives the video data and presents it to the physician. The team used Computer Vision Toolbox™ to scale images in the display and to insert text indicating the current network delay and frames-per-second rate of the display. For the remote side, they also developed a touchscreen control application and deployed it as a standalone application using MATLAB Compiler™.

To test the telerobotic capability, interventional cardiologist Dr. Ryan Madder performed procedures on an endovascular training simulator located 10 miles away. During these tests, the team assessed the effects of network latencies on usability by injecting network delays ranging from milliseconds to whole seconds into the system. These simulator-based tests were followed by in vivo animal tests.

The first in-human long-distance telerobotic-assisted PCIs were performed by Dr. Tejas Patel, who completed five successful procedures over two days on patients located 32 km away at the Apex Heart Institute in Ahmedabad, India.

Corindus engineers are now pursuing FDA clearance to use CorPath for neurovascular procedures. They are also using Model-Based Design to transition the proof-of-principle setup used on the first five procedures to a production system for widespread clinical use.