Use Simulink and Xilinx System Generator to rapidly design, debug, and automatically generate code for an SDR signal processing chain

“It took 645 hours for an engineer with years of VHDL coding experience to hand code a fully functional SDR waveform using our traditional design flow. A second engineer with limited experience completed the same project using Simulink and Xilinx System Generator in fewer than 46 hours.” 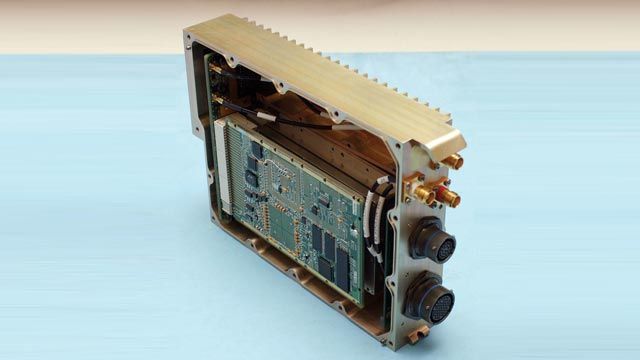 Custom board used in the traditional design workflow.

The U.S. military is expected to spend more than $1 billion on software-defined radio (SDR) technology over the next few years to ensure better communication and interoperability among troops. To meet the demand, defense contractors are exploring improved design approaches for rapidly developing multimode, multiband, and multifunctional wireless devices that can be reconfigured with software updates.

“Using Simulink, we completed all simulation and debugging in the model, where it is easier and faster to do, before automatically generating code with Xilinx System Generator,” explains Dr. David Haessig, senior member of technical staff at BAE Systems. “As a result, we demonstrated more than a 10-to-1 reduction in the time to dev­elop the signal processing chain of a software-defined radio. This really illustrates the potential for improving development production in SDR applications.”

The company would run two simultaneous development efforts—one using a traditional design flow and the other using tools for Model-Based Design. To ensure a fair comparison, each effort would use an equivalent set of cores. Running the two projects in parallel would enable BAE Systems to directly evaluate its existing approach with Model-Based Design on a real-world project.

Concurrent with that effort, Robert Regis, a BAE Systems engineer with more than 15 years of VHDL and software experience, led a separate project using a traditional design flow. In this project, Regis hand-coded VHDL based on requirements and specifications developed during a distinct systems engineering phase.

Comba handed the Simulink model off to Xilinx engineer Sean Gallagher with a copy of the waveform specifications. Gallagher, who started the project with no significant communications systems experience, prepared the model for automatic code generation using Xilinx System Generator by substituting Xilinx blocks for standard Simulink blocks.

After simulating and verifying the updated model using data visualization scopes and bit-error rate meters, Gallagher used Xilinx System Generator and Xilinx ISE to automatically generate VHDL code for the SDR and deploy it to an FPGA for testing.

“Because the design was fully simulated and verified using the model, when downloaded to the FPGA, the SDR implementation worked immediately,” notes Haessig.

Based on the success of this project’s initial effort, BAE Systems has begun a joint effort with MathWorks, Virginia Tech, Xilinx, and Zeligsoft to improve waveform portability. This group is developing an interface that enables code generated by Simulink Coder™ or Xilinx System Generator to be directly incorporated into Software Communications Architecture (SCA) radios.