Leonor Vieira Dias 2021 年 1 月 29 日
⋮
コメント済み: Leonor Vieira Dias 2021 年 1 月 29 日
採用された回答: Iuliu Ardelean
Hello,
I have a table of data. I wanted to create a column that would have written "early" or "late" according to the difference between two values.
So far I have been able to differentiate the values to get 1 or 0 whether the condition was met or not. I wanted to have text instead.
Can we subsitute 1 by "late" and 0 by "early"? Is there an easier way to do this, e.g. using if loop?
Many thanks
T.Final = (T.Early<T.Delay) 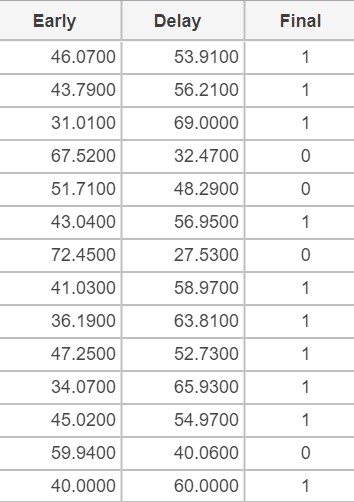 ⋮
Hello, thank you for your answer! I am able to create a new column which is good but I still dont get the text. Could you help me again please?
Thanks in advance

⋮
I got it, I forgot to put a T in front of it. Thank you very much!