Mat 2020 年 7 月 21 日
⋮
コメント済み: Adam Danz 2020 年 7 月 21 日
I was interested in trying to break up my GUI app in to a set of smaller GUIs, all made in app creator, but using only a single app window and allowing the user to switch between them. I made a parent app with a button that when pressed started a second app containing a panel. The second app has a startup function that sets the parent of the panel to the figure window of the first app, which behaves as expected, but the second app window is still present. So then I added another line in the start up function to set its own uifigure to invisible:
% Code that executes after component creation
function startupFcn(app, parent)
app.Panel.Parent = parent;
app.UIFigure.Visible = false;
end
The argument 'parent' is the UIFigure from the first app.
This seems to work as expected, but what happens to the instance of app 2? The figure window is invisible, but it seems the app is still running. If so can it be closed without making it visible to user? What happens to its instance if I close the first app? Can I delete the instance from either app?

⋮
Why not use tabs instead? You could programmatically switch between tabs as needed and they all stay within the same window. Much cleaner and self-contained.

⋮
My app started to contain many components and the classdef file became unmangeable. Breaking the code up into sections allows for better manegement and the development of different sections can be performed individually, which allows for faster code iteration. It also makes reuse of code much simpler, no picking through a large classdef file trying to find all the relevent callbacks/helper functions/properties and so on. It may not be self contained, but it is much cleaner!

⋮
Unless the mlapp file has become so large that it affects the speed at which the app runs or loads, I've never personally felt a difference between a tidy mlapp file containing a lot of stuff vs a distributed version of the same code between several files. When some functions become very large or are used by other functions or GUIs, I do like to keep them external, though. Keep in mind that more overhead processing is required when you distribute 1 app into >1 app.
Instead of forcing the apps to use the same UIFigure, why not use independent UIFigures and just toggle their visibility? It's a lot less work than your current approach.

⋮
Would it be better to create a handle subclass for each section and use an input argument in their creation functions to pass a handle to the parent app? This would avoid having to subclass matlab.apps.AppBase while allowing the GUI to be written in small manageable sections. 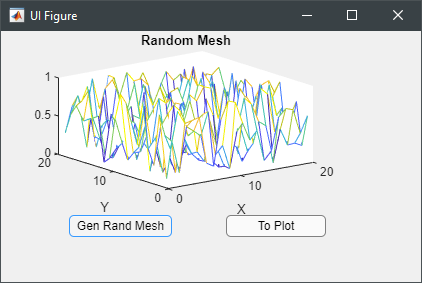 Press To Plot, it will take you automatically to Test1

Test1 and Test2 must be in the same directory

⋮
I am doing something very similar to this but I am using the UIFigure of the first app to plot the GUI components of the second. Assigning the second app to a property in the first should ensure proper deletion of both apps when I close the first apps window, but what happens if I don't assign the second app instance to a varaible? Does it just go out of scope and get deleted after the pushButton call back has run?