"With our legacy programs, it took us eight to 12 months to complete a project. With MathWorks tools, we completed a similar project in just four weeks." 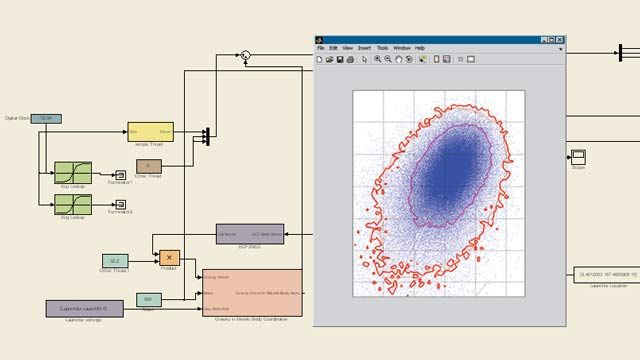 Test ranges require precise analysis to determine when and where they can safely test missiles. Defense contractors that recommend tests need to quickly assess potential risk.

TYBRIN sought to improve the computational speed and functionality of their legacy analysis and modeling tools to respond more quickly to customer requests.

“Our analysis is critical for test ranges where customers must determine when and where they can launch test missiles,” says Owens.

Their debris impact risk analysis tool, which assesses the potential effect of debris on population and property from missile tests, lacked the performance capabilities to provide results quickly.

“We deal with millions of data points,” explains Owens. “Each point has to be filtered on kinetic energy and mass, which takes up to two days to compute.”

Owens and his team also wanted to provide their customers with improved map displays. Therefore, TYBRIN needed a tool that enabled them to choose an appropriate map projection and put risk contours on maps.

Finally, since their legacy modeling tool was difficult to update for new missile designs, they needed more comprehensive modeling capabilities that enabled them to create six-degrees-of-freedom models.

In just one week, TYBRIN recreated the functionality of their legacy risk analysis and modeling tools with MATLAB, Simulink, the Mapping Toolbox, and the Aerospace Blockset after attending MathWorks training.

TYBRIN used the tools to model and analyze the failure modes of upper-atmospheric, unguided research rockets for NASA. Engineers used the Aerospace Blockset to create three-degrees-of-freedom and six-degrees-of-freedom missile models to handle core transformations for simulating a missile launch.

“Before, we used a general transformation program that was written in C, using output from a Fortran model with Perl scripts,” explains Owens. “With the Aerospace Blockset, I started with the ground and modeled the entire flight up to the point of impact. We simply could not do that before with our legacy tools.”

Using the Aerospace Blockset, TYBRIN altered launch elevations and adjusted the motor placement on the back end of the missile to determine where it would travel. Using Simulink, they ran 2,000 Monte Carlo simulations to capture all of the potential destructive actions, including missile detonations and early terminations. They then propagated the debris to the ground using three-degrees-of-freedom models, recording the impact points.

TYBRIN then analyzed the debris catalog with MATLAB and the Mapping Toolbox, determining the probability of impact by constructing a data grid and accumulating results for each grid cell. Using the spatial grid manipulation capabilities in the Mapping Toolbox, they converted latitude and longitude points, computed distance, analyzed data, and produced risk contours.

“The Mapping Toolbox made it easier for our customer to quickly determine the high-risk areas by simply looking at the colors,” says Owens. “The spatial grid display and analysis functions also gave us the flexibility to present our data in many ways and handle the complex distance computations.”

Owens plans to use the geostruct data type in the Mapping Toolbox to organize data for improved visualization.