To develop an instrument to reliably detect and identify gaseous chemicals

"A scientist needs to focus on science and shouldn’t have to recreate or debug math libraries or support code. MathWorks tools are proven, so researchers can concentrate on new algorithms and new approaches." 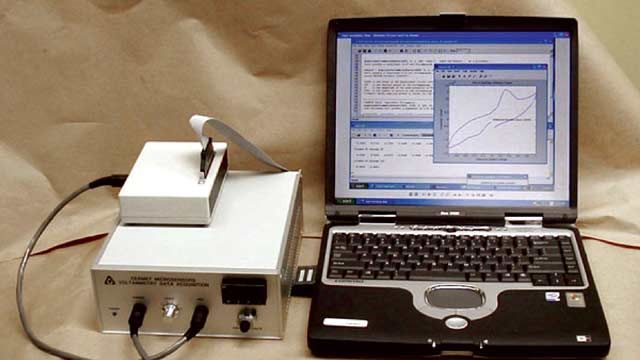 Exposure to toxic chemicals accounts for many respiratory illnesses and deaths each year worldwide. The remedy lies in precisely identifying harmful chemical agents before they are inhaled. With thousands of chemical agent compositions in our atmosphere, however, this is a daunting task.

The Smart Sensor Developer Kit (SSDK), a multiagent chemical microsensor, can identify almost any air-bound gaseous chemical. The award-winning sensor was developed by researchers at Argonne National Laboratory, a U.S. Department of Energy laboratory operated by the University of Chicago, using MATLAB and related toolboxes.

"SSDK would not have been possible without the integrated environment and toolboxes that we have with MATLAB," says Dr.Michael Vogt, the SSDK instrumentation developer at Argonne.

The Argonne team set out to develop an advanced gas microsensor that exploited a well-established liquid chemical analysis technique. The SSDK would comprise measurement software, a miniature sensing element, and minimal specialized hardware.

The researchers sought support for a variety of PCM, ISA, USB, and external parallel port data acquisition hardware to promote easy adoption of the experimental technology. Because they wanted to focus on the material science and the chemistry behind the sensor, they needed to avoid developing custom software for each hardware model.

They also needed to filter and classify the acquired data using signal processing and neural network algorithms and develop a graphical user interface for controlling the acquisition process and visualizing the results.

Using MathWorks tools, the researchers developed simple data acquisition code that could access a variety of data acquisition cards. “Data Acquisition Toolbox allows us to perform a one-time configuration of the hardware,” explains Vogt. “With less than a page of code, I could perform my data acquisition on four different platforms—each one with different hardware.”

The SSDK uses voltammetry, an advanced chemical analysis technique that translates chemical reactions into voltammetric “signature” outputs, enabling the detection of minute quantities of gaseous chemicals—something that was not previously possible.

The researchers implemented gaseous voltammetry using Data Acquisition Toolbox to output precisely shaped analog waveforms, each consisting of 100 to 1,000 points of data, and to excite chemical reactions on the microsensor. Using Data Acquisition Toolbox, they also sampled the resulting signals with an analog input channel. They then used filters from Signal Processing Toolbox to remove line noise. The resulting signals, or voltammetric signatures, included information that identified the chemicals to which the sensor was exposed.

The researchers used Deep Learning Toolbox to perform pattern recognition and identify the chemicals by comparing their signatures to those in a prestored library.

“With Deep Learning Toolbox, we can take an unknown sample signature, compare it to a signature library, find the best match, and calculate a confidence factor indicating how certain the match is,” Vogt says.

To complete their application, researchers developed a graphical user interface in MATLAB that enables users to set voltammetry parameters and visualize the voltammetric signatures. “The application runs easily on any notebook computer,” Vogt says.