Across the globe, hundreds of thousands of workers rise from their beds in the middle of the night to climb into the tight quarters of the cabin of a big rig. This workforce hauls billions of tons of cargo every year to warehouses, groceries stores, and ports. The shipping industry moves nearly 11 billion tonnes (12 billion tons) of freight via human-driven big rigs annually.

With autonomous trucks, TuSimple can make highways safer for truckers and other drivers alike, all while saving money on the transport of crucial goods.

While these rigs are essential to the movement of supply chains around the world, the industry faces a rising driver shortage. The trucking industry has struggled to both retain its existing workforce and certify new drivers, especially as driving schools closed during the COVID-19 pandemic. These circumstances combined have made it difficult for trucking to meet rising demands for supplies ranging from fuel to electronics. 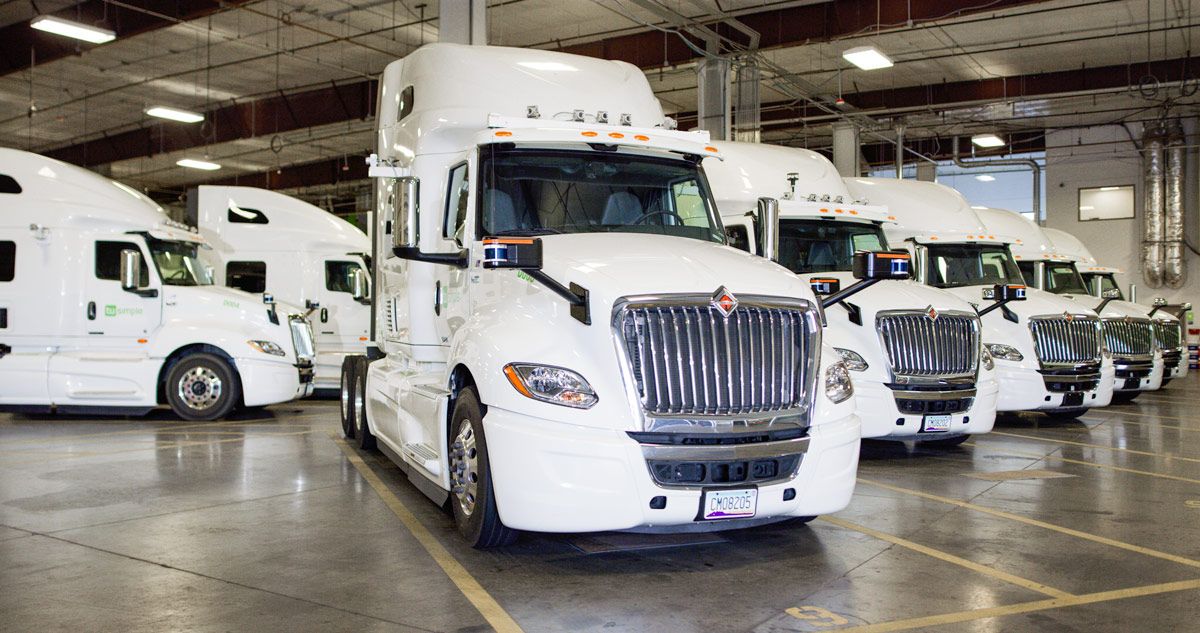 Long-haul big rigs are also a worker safety nightmare. With long hours, often driving through the night or early morning, truck drivers are more susceptible to fatigue than other drivers. The CDC says fatigued driving impairs driving as much as driving while intoxicated.

It was in this combination of problems facing the trucking industry that Xiaoling Han and colleagues at TuSimple saw the opportunity for a new kind of solution: autonomous technology for heavy-duty trucks.

Han, TuSimple’s senior director of sensors and vehicle control integration, says these vehicles could solve a huge problem for the trucking industry. “Autonomous trucks offer a much stronger business case than autonomous cars because the routes are highly-repeatable and the majority of the driving takes place over the highway,” says Han. “While solving the autonomous driving problem for trucks is extremely difficult, it has far fewer problems to solve than autonomous cars.”

With autonomous trucks, Han says TuSimple can make highways safer and more efficient while helping reduce costs and the environmental footprint of trucks.

The Road to Autonomy

It’s not uncommon to see technology across a wide range of industries labeled as autonomous these days, from robot vacuums to your new car. But when it comes to true autonomy, many of these technologies fall short, explains Govind Malleichervu, automotive industry manager at MathWorks.

Level 4 or 5 autonomous trucks would give drivers an opportunity to rest while driving through the night on empty roads.

As defined by the Society of Automotive Engineers, there are six possible levels of autonomy for automotive vehicles, ranging from zero to five. Levels 0 through 3 range from no automation to limited automation, including assisted steering or braking. Due to the limited capabilities, human drivers still control the vehicle and supervise these systems. Level 5 autonomy, where the vehicle performs all driving tasks, is still many years away.

“Automated driving features offered by many OEMs are at Level 2 or Level 2+,” Malleichervu says, where the plus designates increased autonomy without quite reaching Level 3. “With these levels, the advanced driver assistance system (ADAS) on the vehicle controls the braking system, accelerating, and steering, with the human driver still responsible for monitoring the environment at all times and performing all other driving tasks.”

This relatively limited level of autonomy is due in part to the safety concerns inherent in testing and developing ADAS for vehicles in urban environments.

This is where TuSimple’s trucks have an advantage, Han says. While the company doesn’t expect its trucks to be out on the road in full force until at least 2024, testing this technology on less densely driven highways instead of city centers offers an easier path toward achieving full autonomy. To test autonomous vehicles in a city, companies must first come to agreements with local authorities on where, how often, and at what speeds their vehicles can be tested. This often means reducing the area and time available for testing.

Another bonus for highway testing is that it faces fewer pedestrian obstacles than in cities and largely avoids stop-and-go traffic and narrow or uneven roads. While this doesn’t completely remove the risk of harm to other drivers should something go wrong, it does lessen the likelihood of a deadly accident.

Right now, Han says that TuSimple’s trucks are at Level 4 autonomy. This means that the vehicles can drive themselves under limited conditions without the assistance of a human driver—although in TuSimple’s case the company plans to still have human drivers supervise from the driver’s seat. Unlike trucking today, which requires constant vigilance from human drivers, Level 4 or 5 autonomous trucks would give them an opportunity to rest while driving through the night on empty roads.

A crucial aspect of this autonomy that Han and his team have been developing is an autonomous by-wire braking system. The weight of the big rigs, along with the dynamics associated with pulling a fully loaded trailer, makes it harder for them to quickly stop. A fully loaded truck can weigh as much as 36,000 kg (80,000 pounds), whereas a passenger car weighs closer to 1,360 kg (3,000 pounds). The braking system must be able to safely stop the momentum of a heavy truck traveling at highway speeds.

“The by-wire braking system is very complex,” says Han. “The whole pipeline starts from perception, where our program looks at its surroundings in the front and back of the vehicle. This includes motion planning, prediction, and the control algorithm.”

Using perception and sensors such as lidar, TuSimple’s L4 autonomous system sees 360 degrees around the vehicle and 1,000 meters in front of it. The data is then passed along to the safety-critical brake-by-wire control system, Han explains, which then makes the connection between software perceptions to the truck’s hardware to activate safe braking.

“Braking is the most fundamental system in autonomous driving,” says Han. “The safety level for braking is above all the other systems.”

These stricter standards for the braking system are also reflected in its redundancies, Han explains, which allow human controllers to intervene and brake manually if something goes wrong.

“For other parts of the vehicle, such as the engine, a certain level of redundancy will suffice,” Han says. “However, because braking systems are the most safety-critical part of the vehicle, we must have full redundancy including the physical, signal, power, and software systems.”

Trust in the Model

TuSimple is already testing its big rigs on real highways, including a 951-mile trek from Arizona to Oklahoma to deliver watermelons. However, the costs of relying entirely on-road testing can add up quickly, Han explains. Instead, the team largely relies on modeling and simulations as a safe and cost-effective alternative for the by-wire control development. According to Han, as much as 90% of the trucks’ vehicle control unit testing is done using models developed in MATLAB®, Simulink®, and other software.

By using models, the team references a single source of truth, automatically generates code, and can test the autonomous systems with different vehicle constraints.

“For the by-wire braking, we only test at the vehicle level 10% of the time, because it’s very cost prohibitive,” says Han. “It consumes human power and requires additional coordination. So, we do most of the testing in simulation.”

The simulations require modeling how different sensor inputs, such as lidar and radar, are relayed through microprocessors to the truck’s physical control systems. Managing these components through a model enables the team members to work on the design simultaneously, even when they’re working from different physical locations.

“The team can refer to the model to check what’s going on inside the vehicle,” Han says. “It’s much easier than reading the code. That’s why the model is the single source of truth for the whole Vehicle Control Unit team, because we can communicate based on the model across all related functional teams.”

The models also help reduce errors introduced by human coders by automatically generating code to implement designs made at the model levels, says Malleichervu. This approach enables the team to test the autonomous systems with different vehicle constraints, such as different engines or cargo weights. The team relies on MATLAB scripts and GitHub to manage the variants.

Beyond simplicity, Han says that relying primarily on virtual models to test their new designs also helps them break free of a standard design model across the automotive and software industry called the V-model.

“We have a very fast iteration period, which means we release software in a month not a year. … Without modeling, it’s very hard to release a feature in a month, because in that month you need to finish the coding, testing, validation, everything.”

Also known as the verification and validation model, the V-model is a design approach that moves systematically through analysis, design, and validation before implementing new features. As a result, Malleichervu says that taking an engine or vehicle program from start to finish with the V-model can typically take three to five years; implementing upgrades to an existing design requires approximately one year.

For TuSimple, this methodology was too slow, Han says. Instead, the company implemented a mixed method that includes both the V-model and Agile methods when developing their autonomous systems.

“We have a very fast iteration period, which means we release by-wire control software in weeks rather than years,” says Han. “That’s why we need to follow the Agile process as well. That’s also why we rely on modeling. Without modeling, it’s very hard to release a feature in a month, because in that month you need to finish the coding, testing, validation, everything.”

Using this hybrid approach, TuSimple can release by-wire software patches in less than 24 hours and new features anywhere between 72 hours and two weeks. It’s this novel design method and TuSimple’s use of modeling that Han thinks will help the company reach its goal of hitting the highways with autonomous big rigs by 2024.

Seeing the Road Ahead