Regularization for Non-linear fitting with fitnlm.

Carlos Amador 2019 年 11 月 12 日
⋮
Edited: John D'Errico 2019 年 11 月 14 日
I'm trying to fit a non-linear model with many possible coefficients using fitnlm. The amount of data i have is limited. When i use polynomial empirical models i tend to you stepwise regression to find put those coefficients that are most important (reduced number of coefficients that fit most of the variance). However with fitnlm or any other function in Matlab for non-linear fitting will fit all coefficients leading to overfitting. Matlab provides the p values for the different coefficients but since it is fitting all coefficients we can't use those p values to drop coefficients out. is there a way to combine regularization techniques for parameter selection with the fitnlm function which uses least squares fitting?

⋮
Could you do the fitting twice such that upon the first pass, you obtain the p values and the parameter estimates, then upon the second pass, you choose the significant parameters and provide the inputs to the parameters you're leaving out?

⋮
Hi Adam, thanks for suggestion. I discussed this option with Matlab support but showed that it actually cannot be done like this because if you start with all coefficients the order of the p-values is not necesarilly the same as if you start removing terms. 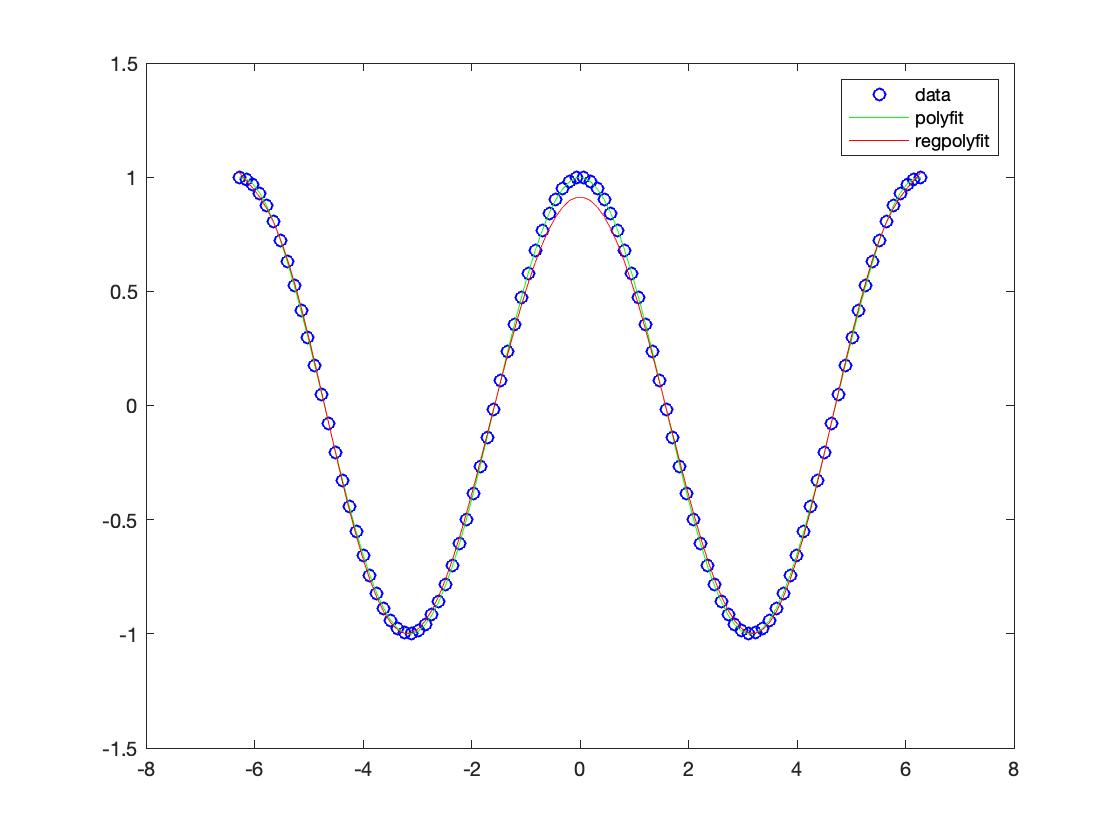 So the regularized polynomial model has its coefficients biased towards zero. But I actually strongly prefer the unregiularized model, even in this case. I suppose I might have chosen a different value for lambda.
In the end, I need to question if you really wanted to fit a high order polynomial model.
A smoothing spline might be a far better choice. Or use my SLM Toolbox, fitting a regression spline.
The idea is that you are using a high order polynomail model, because you don't know how to use anything better, but you have some data where a low order model does not give you an adequate fit. A spline model is a better choice, by far. Just throwing extra coefficients at the problem always leads to ill-posed problems, singular matrices, and in the end, to garbage coefficients. Then you decide to try regularization. A bad idea. You are solving this the wrong way. USE A SPLINE.
My SLM toolbox is available for download from the file exchange.
https://www.mathworks.com/matlabcentral/fileexchange/24443-slm-shape-language-modeling

: Linear model
The estimator is given by

, and this estimator is obtained with fitlm.
If you want to perform a minimum least square with regularization, try either of them:
L1 regularization: lasso https://www.mathworks.com/help/stats/lasso.html
L2 regurarization: ridge https://www.mathworks.com/help/stats/ridge.html
L1 + L2 combination (elastic net): lasso
The degree of regularization of L1 is stronger than that of L2; you'll get a sparse estimate. Therefore important predictors are to be automatically selected.
The estimator for L2 is given by

, where you need to specify the regularization parameter ξ, and this is also the case with L1.

⋮
I'm sorry - I thought you were using 'fitlm'. I took it wrong.
But please note that Linear model is not always polynomials.

is also a Linear model. I thought your problem is linear since I thought you were using fitlm.
Non-linear + Regularization, that's what you want. OK.
Personally I've never heard of such things before; if you know please let me know if it's possible to do.
This may help you...hope it works for you:
https://www.mathworks.com/help/ident/ug/regularized-identification-of-dynamic-systems.html
Also, looks like there is regularization models for GLM available in MATLAB:
https://www.mathworks.com/help/stats/regularization.html?s_tid=CRUX_lftnav