ibabinaca 2019 年 7 月 2 日
⋮
回答済み: Sohini Sarkar 2019 年 7 月 10 日
採用された回答: Sohini Sarkar
Hello,
I have this pde model in which i want to put some temperature sensors in the superior face in order to know the temperature in a certain point (the red dot for example). The optimun solution will be covering all the face with sensors but this is non-viable. 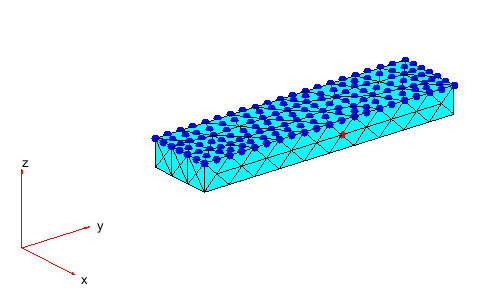 So i want to know which coulb be the best algorithm in order to know which is the optimal number and position of the sensors for obtaining the temperature in a certain position.

Sohini Sarkar 2019 年 7 月 10 日
⋮
This is a very relevant and interesting problem. Over the years, many research articles were published to find a solution for this problem. It is not a simple problem and hence requires some research. Here are some articles that you can leverage from:
First 3 used MATLAB to solve this. You can try to make it more manageable by fixing the number of sensors and use locations as design variables or vice versa. Hope this helps!

Ravi Kumar 2019 年 7 月 2 日
⋮
Not sure if I understand your question correctly. Are you referring to location mesh nodes when you say sensor?
My guess is you are looking for interpolation function. Refer to the interpolateTemperature funciton, once you set up and solve you can get the temperature value at any arbitrary location within the domain using the said funciton.