A MATLAB Toolbox for Two-Dimensional Rigidity Percolation: The Pebble Game

Welcome to MATLAB toolbox for 2D rigidity percolation. The generical rigidity of graphs plays an essential role in the field of sensor network location. Jacobs et al. provided an exciting and effective method that uses pebble games to percolate the rigidity of a network [2]. To meet the need of research and teaching on MATLAB, we implement the algorithm and build a toolbox. The implementation disassembles the pebble game into elemental actions, which provides interactivity and reusability. Benefitting from the build-in graph operation from MATLAB, the toolbox has good compatibility. The practice shows the following convenience:

We sincerely hope our toolbox facilitates research and teaching. Any suggestions, corrections, and improvements are welcome.

Pebbling is a game that involves placing pebbles on the vertices of a directed acyclic graph according to specific rules [1]. When the pebble game is used to percolate the rigidity of 2D generic networks, the rules are as follows. Each vertex is given two pebbles. The edges are added to the graph one at a time, and pebbles are rearranged to cover the edge. First, we look at the vertices that incident to the newly added edge. If either vertex has a free pebble, then use it to cover the edge. In the meantime, the edge is directed away from the vertex that offers a pebble. If neither of them has free pebbles, their pebbles must have been used to cover existing edges. We should try to free up a pebble for the newly added edge. If a vertex at the other end of existing edges has a free pebble, then that pebble can cover the associated edge. The swap will free up a pebble. More formally, we are searching for a free pebble that follows the directions of edges. This search of a free pebble continues until either a pebble is found and a sequence of swaps allows the new edge to be covered, or else no more vertices can be reached and no free pebbles have been discovered. If we fail to find a free pebble, the new edge will be removed and play no roles in pebble games.

Two tasks should be accomplished when percolating the rigidity of a 2D generic network: identifying independent edges and exploring rigid clusters.

The first task starts from a graph that contains no edge. We randomly add one edge that should be tested to the graph and quadruple the edge; then, four edges are added to the graph one after another to find pebble covering. If four edges are all covered by pebbles, three will be removed from the graph. The left one is an independent edge. If not, we remove all of them and mark the edge redundant.

Our toolbox differs from the work [2] in two ways. The toolbox performs a breadth-first search; then, it moves through the search results to find a free pebble. This strategy finds free pebbles faster and is easier to program, but it will consume more memory. Furthermore, we believe that pinning free pebbles at a vertex is equivalent to using free pebbles to cover the edge (Theorem 1). Thus, we pin three pebbles and use the fourth one to cover the edge rather than cover quadruple edges. We will improve this claim. 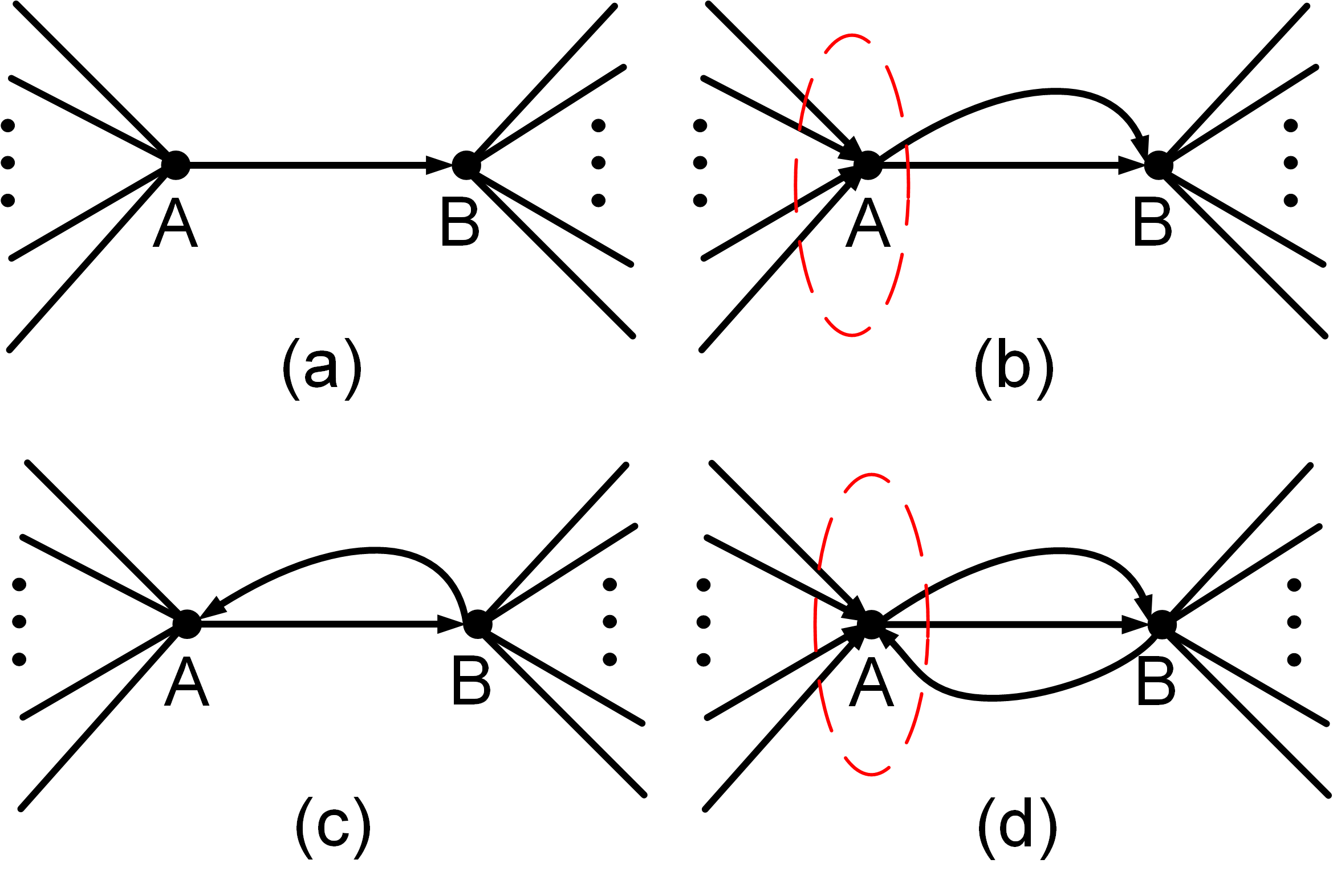 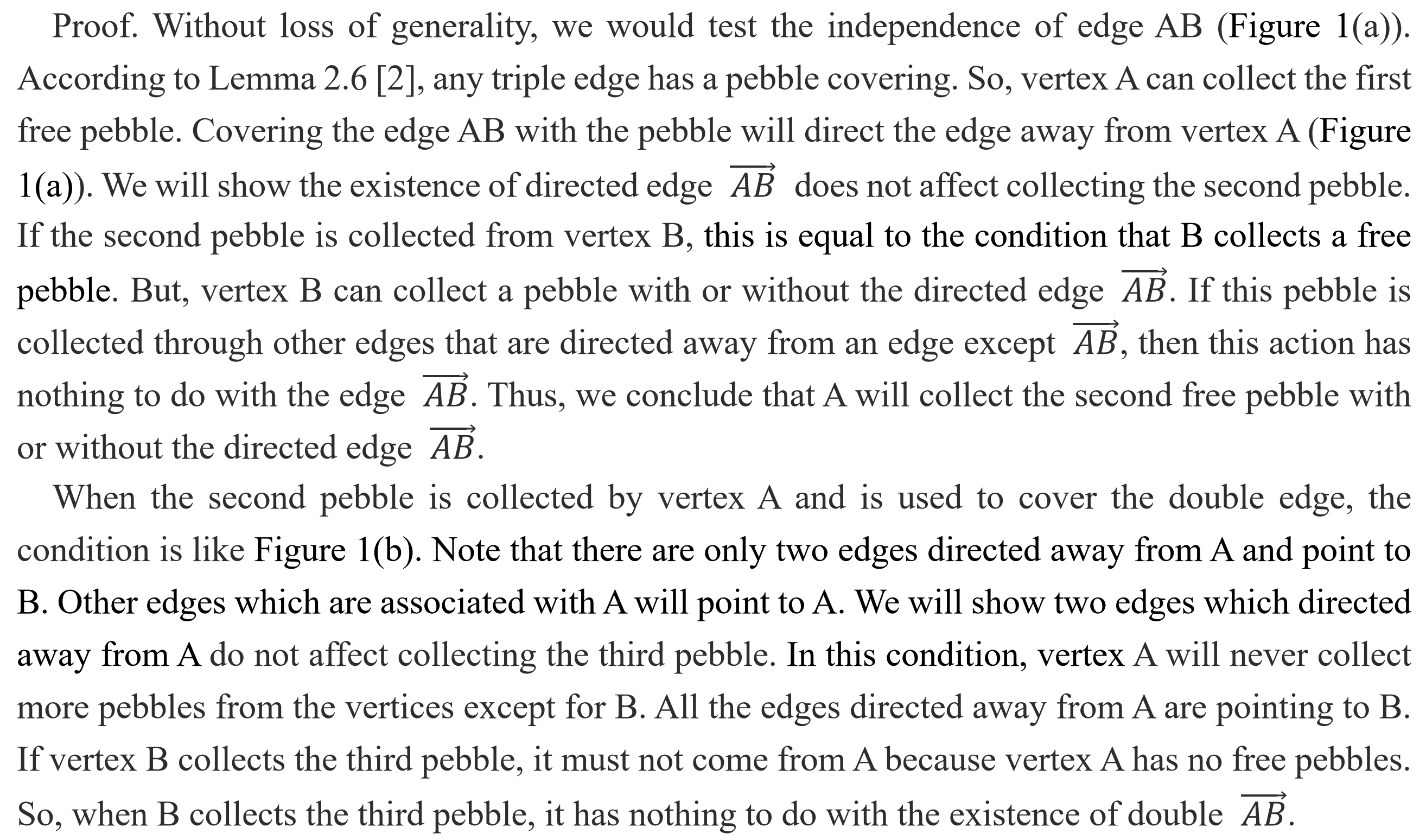 If a pebble from vertex B covers the double edge, the condition is similar to Figure 1(c). In this condition, freeing a pebble from A to B will lead to the condition of Figure 1(b). However, if the third pebble is collected through other paths, the collection has nothing to do with directed edges between A and B.

Two pebbles from vertex A and one from vertex B have been used to cover tripled edges in the last condition (Figure 1(d)). The fourth pebble can only be collected by vertex B and will not from vertex A. The existed three directed edges between A and B do not affect vertex B collecting pebbles.

Since the directed edges between vertex A and vertex B will not affect collecting more pebbles, we can pin pebbles on the vertices rather than covering the first, double, and triple edges.

The toolbox is based on the build-in graph operation of MATLAB, so it should be compatible with version 7.6 and later. The user may add toolbox files to MATLAB’s search path with m-file ‘SetPath.’ There are examples in the toolbox to play with; then, users get out to build personal stage of pebble game.

The interface of PebbleGamePlayStage is the same as the function graph, which is a built-in MATLAB class. The first step is to create a table that contains a variable EndNodes, such as:

The table is used as the parameter to instantiate PebbleGamePlayStage.

Then, store two associated vertices of an edge into different matrices.

When the instantiation PebbleGame is created, the class UserInPut_Group is instantiated automatically. Its handle is copied to PebbleGame.UserInPut. This class shows the user’s input and provides data for instantiating Operation_Group. The latter, whose handle is PebbleGame.Operation, identifies independent edges and explores rigid clusters. The MATLAB will pop up two figures, such as Figure 2 and Figure 3. One shows the user’s input, the other displays the process of the pebble game. 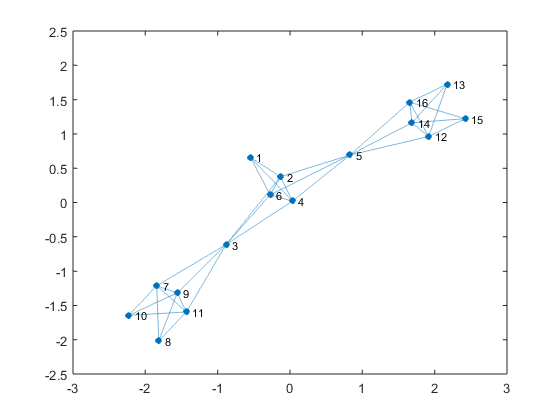 Figure 2: An example of user’s input graph. It is used to confirm the input or be treated as a reference during the pebble game. 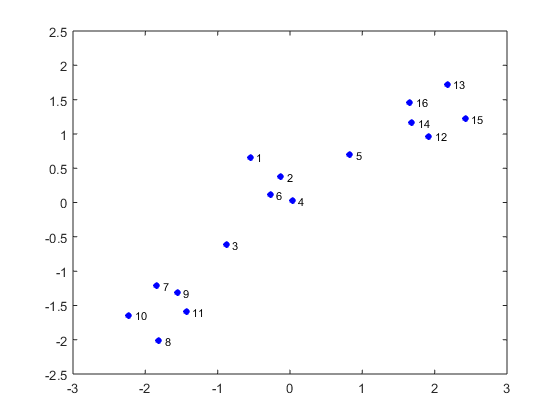 Figure 3: An Example of the initial status of a pebble game. No edge has been added to the graph yet. The vertices are painted blue, which means each vertex has two free pebbles.

The toolbox contains multiple functions to customize pebble games. However, if the user prefers identifying independent edges with the classic pebble game [2], only one function should be enough. 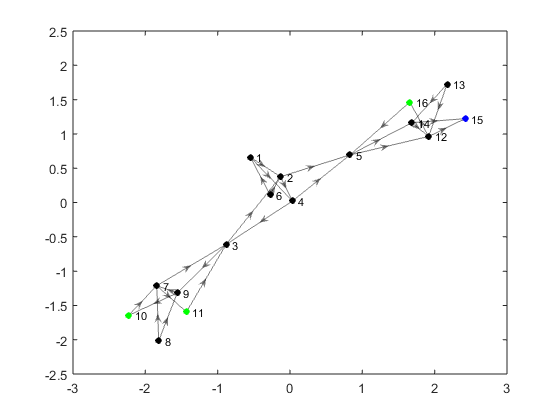 Figure 4: Pebbles covering all the independent edges. Their edges are directed away from the vertices that offer the pebbles. Most of the vertices use up their free pebbles and change color to black. Three greens remain one pebble. Redundant edges are missing because they play no roles in pebble covering.

Identifying Rigid Clusters and Coloring Them

Before exploring rigid clusters, the user executes function StartIdentifyRigidCluster to get the toolbox ready.

The code below explores rigid clusters as many as there are.

As shown in Figure 5, the function ShowRigidCluster can color the rigid clusters. Use drawnow wisely to show a dynamic figure. 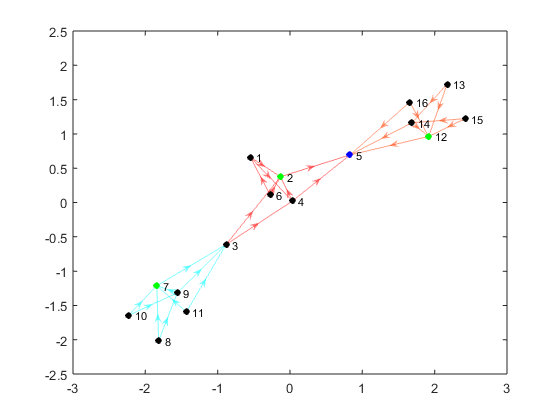