Is there more efficient way to find the neighbors of two nodes or more other than using a loop?

Waseem AL Aqqad 2021 年 6 月 17 日
⋮
編集済み: KSSV 2021 年 6 月 23 日
The built in function "neighbors" accepts only scalar inputs, so I wonder if there is more efficient way than performing the following
for ii = 1:length(inActive)
b = neighbors(G_dmg,inActive(ii));
end
I usually concatenate the neighbors of all nodes in one variable, but I cannot tell which nodes are neighbors to node X and which are neighbors to node Y.
b = [];
for ii = 1:length(inActive)
b = [b, neighbors(G_dmg,inActive(ii))];
end
Your ideas would be highly appreciated.

⋮
Could you say some more about what your next steps with variable b will be? You'd like to know for each element of b which node it was neighboring - so in which way would that be most convenient to use in the next step?
Also, here b could contain some nodes multiple times, for example if both inActive(1) and inActive(2) have the same node as a neighbor. Would this be a problem for your next steps? You could use unique(b) to remove any duplicates, but that would make it harder to also define which node any element of b was the neighbor of.

⋮
Exactly. This is what I noticed during debugging my code,so I used unique (b) and setdif(b, inActive,'stable').
I designed an algorithm to emulate Load-based faulty graph (Nodes fail when their Loads exceed their capacities), where I assign a -inf to failed nodes' loads without removing their links. Now, I'm trying to design a recovery algorithm, where I want to scan those inactive nodes( have -inf Load) and check if they have active neighbors, if yes, 1. rank them in a descending order, 2. take the average of their loads and 3. assign the value to the inactive node they were neighboring.
I hope this makes sense to you.

⋮
So something like this?
for ii=1:numnodes(G)
if isinf(G.Nodes.Load(ii))
G.Nodes.Load(ii) = mean(G.Nodes.Load(neighbors(G, ii)));
end
end
With the difference that you want to traverse the nodes not as 1, 2, 3, ..., numnodes(G), but instead start with the node that has most active neighbors (neighbors with non-Inf value)?
That is, if the first node has all active neighbors, its load will become some value that's not Inf. Otherwise, it will stay Inf, since the mean of a set of values that contains Inf is again Inf.
Do I understand this correctly?

⋮
>> but instead start with the node that has most active neighbors (neighbors with non-Inf value)?
I want to start with the inactive node(it's Load has negative inf) that it's neighboring nodes are using a high fraction of their capacities, say 99%. and then the inactive node that it's active neighbors using 95% of their capacities and so on until I scan all inactive nodes and see if I can recover them.
>>That is, if the first node has all active neighbors, its load will become some value that's not Inf
Correct. But the line inside the if statement in your code should exclude the neighbors with -ve Inf Loads(inactive nodes), and just take the neighboring nodes with none -ve Inf( have other values, like 800 or 200), that is, active nodes.
Do you think this is a realistic approach/ recovery process?
Thanks

⋮
You might be wondering why did I assign negative Inf to the loads of failed nodes. It's basically because in the fault function, I added some disturbance value to the loads of some of the nodes and then compare it to a failure threshold value(capacity). if it is gt this threshold, they fail. And since I don't want my code to count those nodes more than once, I assign negative value to their loads ( whatever disturbance I add to them later, it will stay -ve inf). I'm doing this instead of removing the links of the failed nodes, hence neighbors function might count them more than once.

⋮
Ran in:
All right, I think I understand it all. This seems like a realistic approach to me, yes, although I have no knowledge of load-based fault graphs.
To compute the number of neighbors with Inf loads, you can use the following code, which might be faster than a loop over all neighbors:
rng default;
G = graph(rand(5) > 0.3, 'upper', 'omitselfloop');
load = [-Inf; -Inf; 5; -Inf; 9];
p = plot(G);
highlight(p, load ~= -Inf) 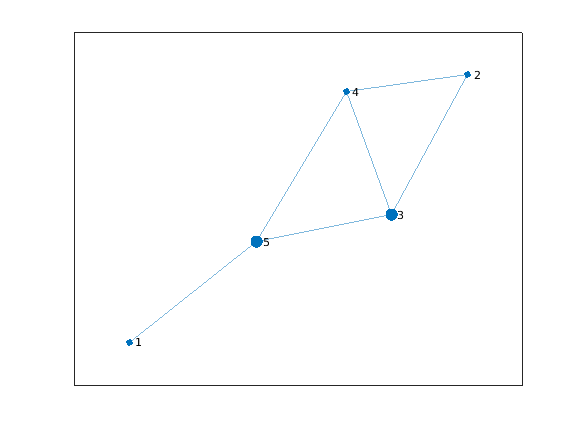 ⋮
This is so clever and so fast in providing a solution to my problem. Knock on wood!
Thank you, Christine.
I will let you know what will happen when I update nrActiveNeighbors or when I increase numnodes(G).