How to extract some information from a txt file

Stefania Avvedimento 2021 年 3 月 4 日
⋮
コメント済み: Star Strider 2021 年 10 月 19 日
採用された回答: Star Strider
Hi all,
I am facing with an issue on how to extract some information from a txt file in a matrix format. Find attached the txt file.
So lets say I want to extract the values of cNH3 over time in a matrix format (let's call matrix 1) and then the values of cNH2CL over time (matrix 2) for nodes ID Node 10, Node 40,Node 265 (not consecutive nodes), how could I do?
Actually I need these information for more than three nodes, lets say for i ID nodes.
Thanks in advance,
Stefania

⋮
Thanks Star.
Could you please explain me what k=1:26 refers to?
Instead of having as many cells as there are nodes, is there any way to collect results in:
The results format I would like to get is showed in the xlsx file I sent.

⋮
As always, my pleasure!
The matrices are quite large, so it might be best to put them on different sheets in the Excel file rather than the way you originally specified. I have not worked with Excel for a while, however it should still be possible to link them and do other calculations with them even if they are on different sheets.

⋮
‘if I have an HeaderlLine that can change from Node JUNCTION to Node RESERVOIR and Node TANK (see figure attached) how could I skip them?’
I do not understand what you want to do or how they are involved with the earlier code, since it does not appear that they were part of it.
Something like this would probably work:
while ~feof(fidi)
getline = fgetl(fidi);
if any(contains(getline, {'JUNCTION','RESERVOIR','TANK'}))
continue
end
NN = regexp(getline,'\d*', 'match');
if (isempty(NN)) || (numel(NN) > 1)
break
else
NodeNr(k1,:) = str2double(NN{:});
secread{k1,:} = textscan(fidi,'%s%f%f', 'HeaderLines',4, 'CollectOutput',1);
secread{k1,:}{1} = datetime(secread{k1}{1}, 'InputFormat','mmm:ss','Format','mmm:ss');
k1 = k1 + 1;
end
end
I cannot test that, so I leave that to you. Let me know how it works.
‘Is there a reference where I can learn the code you wrote step by step? I don't want to just use it but understand it. For example, I can't understand the output of NN 1x5 cell (17 11 17 03 2021).’
The code first uses a for loop to read the first 26 lines of the file and discard them. (You can save them to a cell array if you want to. That would require only a minor change.)
The while loop iterates through the rest of the file until it either hits an end-of-file (eof) indicator or until the ‘NN’ variable is either empty (indicating that the code has read beyond the end of the file if there is no valid eof indicator) or if there are more than one element in ‘NN’ (so it should have trapped and excluded the (1x5) cell). The (1x5) cell will show up in ‘NN’, however it will not be saved in ‘NodeNr’, since the if,else block will cause that condition to exit the while loop before that. The rest uses the textscan function to read that section of the file, saves it in the ‘secread’ cell array, and converts the first cell to a datetime array. (Another possibility would save it as a duration array, however I was busy and a bit rushed yesterday and did not have time initially to explore that. I will re-consider it today and if that improves the code, I will post back here with the updated code.) It then closes the file and continues with the rest of the processing.
As for references, I linked to the most important functions here, so you can explore them.
(It could conceivably be possible to use functions other than textscan to do this, however textscan lends itself to such applications, and I have been using it for problems such as this before the newer file reading functions were introduced, and I am used to using it in this context.)
’I promise not to bother you anymore.’
No worries! If you have questions, I will do my best to reply to them.

⋮
That would likely be easier.
As always, my pleasure!

⋮
Hi Star,
I hope you can help me again.
I have a similar .txt file that I want to extract in a matrix format. Just the heading at each results is different. For space limitations, I send you the txt file reduced in size.
So as in the previous task, I want to extract the values of EPANET over 240-h in a matrix format (let's call matrix 1) and then the values of WUDESIM over time (matrix 2) for i Junc_ID nodes and repeat the process til the end. Eventually (not necessary) extract the Pipe results also.
The problem is that I can't deal with the rows n. 7-8 since I'd like to extract just Junc_ID with the number below. So I am facing with the match expression function you previously called
NN = regexp(getline,'\d*', 'match');
Thanks a lot,
Stefania 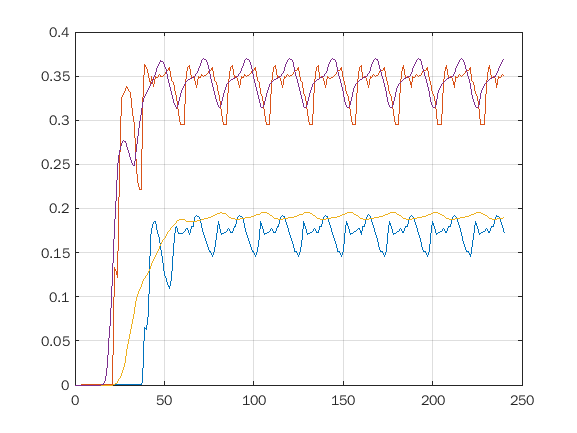 function M = bufr(s,r)
% Star Strider's Emulation Of The Basic 'buffer' Function
% s = Signal Vector
% r = Desired number of rows
M = zeros(r,ceil(numel(s)/r));
M(1:numel(s)) = s;
end
This was more of a challenge than I’d anticipated, because I wasn’t expecting so many missing values. Removing them was necessary to get this working. (Since the last column of ‘T1’ is entirely missing, I removed it from ‘T2’.)
This uses my emulation of the buffer function to reshape the matrices.
.

⋮
I am lost.
I am not certain what you want, and I do not understand ‘example results.png’.
The data only imported for ‘Chlorine’ anyway, and for whatever reason readtable did not import the ‘Pipe results’ columns. (Those would require a different appproach to read.)
So in the end, ‘Time_r’, ‘EPANET_r’, and ‘WUDESIM_r’, are all for ‘Chlorine’. The ‘Junc_ID’ then represents each column of the resulting matrices. That code would be essentially the same regardless, because the results would be essentially the same. To get the matrices for the column data to be row vectors instead, simply transpose them.
With respect to 'VariableNamingRule', either substitute that with 'ReadVariableNames',true, or just omit it. Not all versions of readtable support those options.
.