Jake Gonzalez 2018 年 9 月 24 日
⋮
コメント済み: Jake Gonzalez 2018 年 9 月 25 日
採用された回答: Fangjun Jiang
Recently I was trying to take a 2x5 matrix signal and convert it into two 1x5 row vectors for further computation. To do so, I used the Simulink Selector block, and selected a 2 dimensional input (M of my MxN). Then to try and get just a row vector for dimension 1 and 2 respectively, I selected the Starting Index Option, and made sure that dimensional values were consistent (see image):

This setup works for the first row vector, but fails for the second row vector claiming the following error:

I eventually figured out how to split them into row vectors correctly via the following setup: 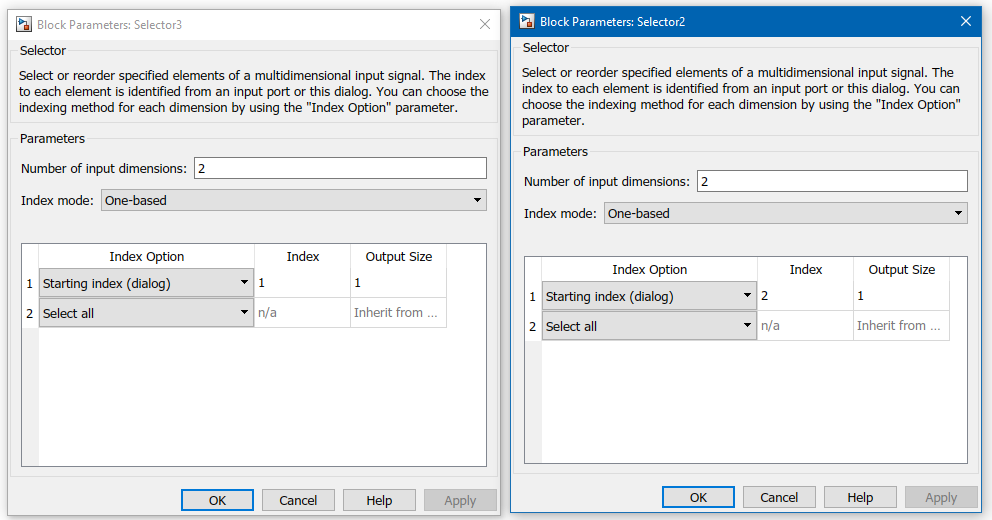 I am curious why the first setup works for the first row, but fails for the second row. Is this a bug, or do I have a fundamental misunderstanding of how this selector block is functioning? It seems odd that it would work in an inconsistent manner.

⋮
That's because when the Starting index (dialog) option is used, Simulink selects the elements based on the Index column and Output Size. Your input has only 5 columns. If you set Index to 2 and Output Size to 5, you are telling Simulink to select columns 2 3 4 5 6 (size of 5). If your goal is to extract the last 4 column elements in the 2nd row, you can set output size to 4. Result would be 7 8 9 10.

⋮
Aha! Based on this information, I made an edit to the input parameters and got the result I wanted. 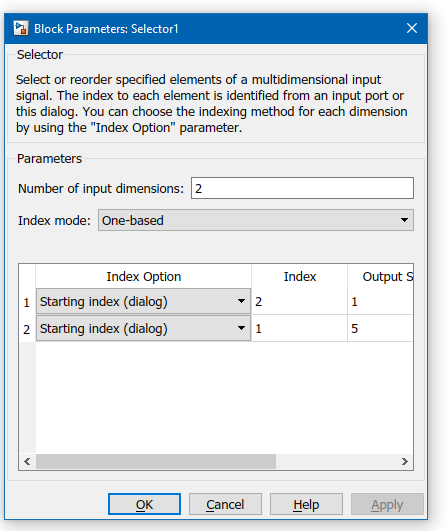 Fangjun Jiang 2018 年 9 月 24 日
⋮
Are you sure? I tried as your example and there is no error. The error happened in "Selector1" yet the dialog show "Selector2" and "Selector3".

⋮
Ahh, the image is a bit misleading. I commented 'Selector1' out and re-ran before un-commenting it to show that Selectors[0,2,3] do what I expect them to do, but 'Selector1' fails.

⋮
Wanted to link the Example model in case you wanted to look at exactly what I have.