Develop an end-to-end simulation of the European global positioning system, including a bit-true software receiver

Use MathWorks tools to simulate signal generation and transmission, design the software receiver algorithms, and implement the receiver architecture

"We have seen a number of project teams at DEIMOS Space migrate from Fortran or C programming to Simulink and Simulink Coder because they realize a 40% improvement in development time and the resultant code is just as fast." 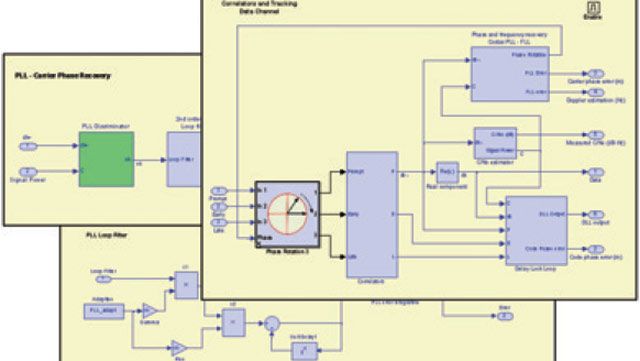 The European Union's Galileo satellite navigation system serves as an independent alternative to the U.S. Global Positioning System (GPS). Galileo's satellites provide improved coverage of satellite signals at high latitudes. They also deliver high precision—to within 10 centimeters when combined with ground station signals, and within 1 meter by itself.

To expedite development, the Galileo Joint Undertaking (GJU) funded the Galileo Receiver Analysis and Design Application (GRANADA), a configurable tool that serves as a platform for integrating and evaluating receiver technologies.

DEIMOS Space needed to build an end-to-end simulation of GRANADA components, including signal generation, transmission through the atmosphere, and processing by the complete receiver chain. GRANADA needed to be modular and flexible enough to enable application developers to replace the standard receiver architecture with their own algorithms and code.

The signal processing chain has a sampling frequency of approximately 200 MHz from the transmitter to the receiver. Most simulators of this kind require additional CPUs, but DEIMOS Space needed to achieve bit-true simulation of this chain on a single PC.

The engineering team followed European Cooperation for Space Standardization (ECSS) E40B standards for software development throughout the project, relying on MathWorks tools in the architecture design and code implementation phases.

"The GJU validated that we were following the ECSS-E40B standard throughout software development with MATLAB and Simulink. No additional investment was needed to turn a prototype into a finished product," says Augusto Caramagno, Head of the Advanced Projects Division.

The team developed a Simulink model that generated Galileo satellite signals. DEIMOS Space needed to simulate very different sampling frequencies in the same model, enabling the user to configure each frequency independently. They did this using the variable step feature in Simulink. "Variable steps were one of the key features of Simulink for us," Caramagno says. "We wouldn't have been able to offer users full flexibility in the receiver frequency plan without them."

"We used DSP System Toolbox extensively because all the simulations required discrete signals, and the toolbox enabled us to define the sample frequencies very easily," says Diez.

In Simulink, DEIMOS Space ran simulations that concurrently generated signals, which they processed in the receiver chain. After debugging the receiver, they created a transmission channel model and introduced noise and perturbations, such as multipath delay and GPS interference, and dynamics, such as Doppler shift.

For each transmission effect that was added, the team retested and refined the receiver model, adding more complex tracking loops, filters, and other enhancements.

With MATLAB they created an interface that enables application developers to configure GRANADA by selecting parameters before automatically generating C code from the model using Simulink Coder™.

GRANADA was completed and delivered on time as part of the first call of the GJU’s Galilieo Research and Development Activities program.

GJU has authorized DEIMOS Space to commercialize GRANADA and make it available to a wider range of GNSS Receiver Manufacturer and Navigation Application developers.