As you drive down the highway these days, wind turbines off in the distance are a familiar sight, sprouting up from the landscape like so many oversized metal dandelions. Yet, how often do you see wind farms today with turbines that aren’t turning?

The every wind farm experiences time not spent generating electricity. (According to the U.S. Energy Information Administration, over the course of 2016 wind farms in the U.S. operated at just 34.7% of their capacity — a number that includes both downtime for maintenance and days with insufficient wind.) In fact, the wind’s intermittency is probably the greatest downside to this otherwise free, clean, and abundant source of energy.

But it doesn’t have to be this way, say a cadre of technologists, engineers, and startup companies. Geothermal energy is an “always-on” source of power. In 2016, geothermal energy sites in the U.S. operated at 74.2% of their capacity. What if wind could somehow be made to approach geothermal-scale capacity?

Next-generation wind energy advocates point out that you only need to go one kilometer up into the sky to find winds that almost never stop blowing. According to a recent study, for instance, the entire world’s energy budget is a drop in the bucket compared to the wind energy found at high altitudes. The world consumes some 18 terawatts of power at any moment (source: IEA), and according to this study, extracting 18 terawatts of power from high-altitude winds would not make a noticeable difference to the world’s winds or climate.

Moreover, unlike conventional wind farms, where a few windy regions on Earth are the prime locations, potential airborne wind energy (AWE) sites are prevalent across the world. High-altitude winds blow more steadily, more powerfully, and more reliably nearly anywhere on one might care to look.

AWE turbines could, in fact, represent the quantum leap forward that wind energy needs. They could join the mainstream of future zero-carbon energy sources that are electric grid-scale levels of robust, reliable, and always (or nearly always) on.

So how does the world get there from here? For starters, as most AWE companies and researchers have discovered, the most promising AWE systems are not actually turbines — they’re kites, modified parachutes, drones, dirigibles, tethered aircraft, or some clever combination of these aerial systems.

Yet ditching the turbine complicates the problem considerably. In a single step, the engineering problem goes from the comparatively simple one of making a propeller fixed to a pole in the ground to creating an airborne system of custom-fit aerial technologies that now have the dual problem of hovering or circling with a strictly confined tether — buffeted by those never-ceasing winds — while somehow generating more electricity than it consumes in propelling and guiding itself and maintaining its own operations.

AWE, in other words, is a very challenging engineering problem. But its appeal is apparent too.

“It has the potential to be huge,” says Antonello Cherubini, research fellow at the Scuola Superiore Sant’Anna in Pisa, Italy. Cherubini has conducted perhaps the most comprehensive overview of the entire AWE industry, publishing his group’s findings in a 2015 issue of the journal Renewable and Sustainable Energy Systems. ”

"High altitude winds are extremely favorable. We are talking about orders of magnitude more than at ground level. Imagine what humanity could do with a wind turbine that could access winds that are 50 times more powerful with respect to what they can reach today.”

Megawatt-scale AWE plants are not difficult to envision, Cherubini says, considering there’s nothing fundamental in the physics that couldn’t be scaled up to a farm consisting of larger airborne wind “turbines.”

For the Torino, Italy-based startup company KITEnergy, the AWE “turbine” is that wind-lofted flyer in their company’s name. Kite-based AWE, says KITEnergy project manager Gian Mauro Maneia, has the potential to reach the megawatt scale.

The company’s 60-kilowatt prototype generates power on a give-and-take scheme in which the parasail-sized kite flies at an altitude of between 300 meters and one kilometer. Then, a winch connected to a generator at the ground station lets the tether out. The the winch as the kite pulls the tether out generates electricity. The kite “autopilot” software maneuvers and reels the kite back to its original position, from where it pulls on the tether again to start the cycle anew.

The company is now working on a 250-kilowatt model, Maneia says, which represents one-quarter of a one-megawatt, kite-based AWE wind farm.

He says a typical ground-based windmill sited at a windy location might operate 2000 to 2500 hours out of the 8760 hours in a year. KITEnergy’s prototype can be sited in many more locations than the selective windy-site-only geography that ground-based windmills require. And even still, he says, they find they can generate electricity at least 3000 to 3500 hours per year operating at the KITEnergy system’s nominal capacity. 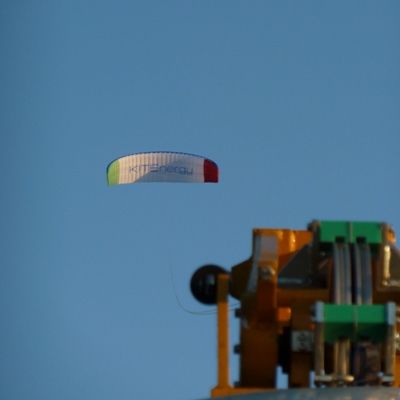 Scaling up to the 250-kilowatt prototype, he says, involves two big challenges that require substantial computer simulation: the kite’s automatic flight control system and the generator’s power system. KITEnergy power systems use two energy storage technologies. One energy in the electric field of parallel electric plates (a so-called “supercapacitor”), while the other energy via chemical reactions (a.k.a. a battery). The supercapacitor can charge and discharge rapidly, but it doesn’t retain its power over the longer does. So, striking the right balance between gulp-sized and sip-sized energy requires careful modeling.

Of course, kites aren’t the only way to generate AWE. A second popular modality is via drone. The Dutch company Ampyx Power has developed a drone-based AWE system that is similar in approach to KITEnergy — the reel-out and reel-in tethered and ground-based electricity generation approach. 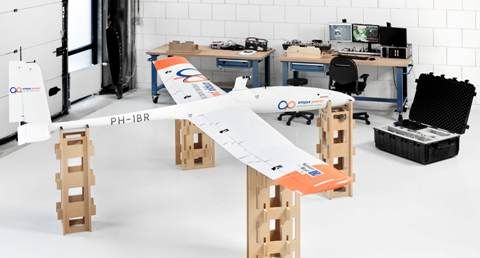 But Ampyx Power’s strategy is to target primarily sea-based wind farms. Traditional offshore wind farms put a lot of torque on the turbines’ foundations. Ultimately, over the span of years, the torques so loosen the foundations that the sites must be abandoned.

Yet, says Michiel Kruijff, head of product development at Ampyx Power, their AWE system applies just 20% to 30% of the torque on the foundation compared to a standard windmill today. So, an Ampyx Power drone AWE platform could be swapped in when an offshore turbine is swapped out.

“There are 600 poles waiting to be refurbished in the North Sea alone,” Kruijff says. “Our projected launching customer has 100 such poles.”

In addition to siting on pre-built structures, Ampyx Power’s AWE strategy offers other cost-cutting measures for what they project will be power ratings comparable to those of a present-day offshore wind turbine. For starters, transporting and installing the system is simpler, because there are no oversized components like giant wind turbine blades that require special transport and clearance.

"The complexity of this is in systems and software. In the end, when everything’s said and done, the system should be simple. But the software will be complex. That’s the challenge we’re working on now.”

So perhaps in a decade or so, as you’re driving down the highway, instead of huge metal dandelions, you might just see a cluster of kites or tethered drones performing loops and figure eights high in the sky — all the while generating energy. And if innovators like Cherubini and Kruijff are right, you might also wonder why people once spent so much time and effort trying to wring wind energy from intermittent gusts and gales down here, near the ground.

The Robot Made Me Do It:

How Robots are Changing the Lives of Children with Disabilities

Designing a Robotic Prosthetic for a Professional Drummer

Turning a Medical Crisis into an Engineering Challenge to Save Lives