Suction dredging is an industrial process running on a ship. Combining hydraulic, mechanical, and electrical components, the complex onboard machinery of a suction dredger extracts sand from the seabed and moves it to another location to create islands, expand ports, deepen channels, or recover beaches (Figure 1). 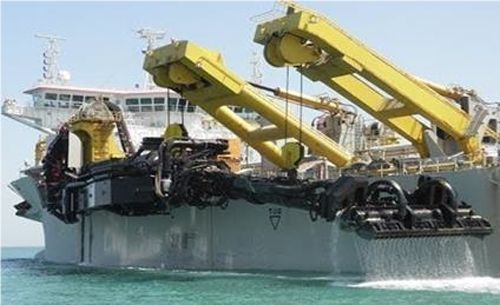 Traditional controller designs for dredger machinery are split between two hardware platforms: Sensor monitoring and actuation processes are implemented on a PLC, while more complex algorithms are implemented on a PC workstation. Both systems are then tested extensively during commissioning and at-sea trials.

Our engineering team has adopted a new approach that takes advantage of the powerful processing cores available on modern PLCs. We use Model-Based Design with MATLAB® and Simulink® to develop the complete controller and implement it on a single PLC. We then run hardware-in-the-loop (HIL) tests with a Simscape™ model of the physical system running on a second PLC.

Although we were new to Model-Based Design and to dredger control applications, within four months our team of just three engineers had completed a prototype controller capable of keeping a dredge head mounted on a 30-meter suction tube to within five centimeters of its target depth (Figure 2). The plant model we developed now serves as a digital twin of the dredger, enabling us to complete virtual commissioning of the vessel. 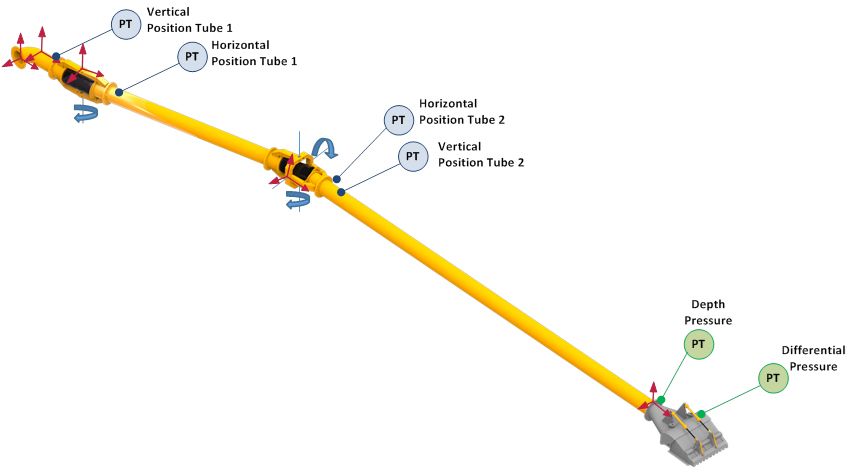 In the first phase of the project, we modeled two core modules of the control system: Draught and Load Monitoring (DLM) and Suction Tube Positioning Monitoring (STPM). The DLM module provides real-time measurement of the ship’s draught and the current state of the ship’s load and uses these measurements to calculate trim and list. The STPM module calculates and monitors the position of the suction tube and dredge head. This module is one of the most intricate in the system, as it uses measurements from inclinometers, pressure sensors, and other sensors to perform complex transforms, including rotations and translations. These calculations determine how much to retract or extend the cables holding the suction tube.

In the next phase, we modeled the Automatic Draghead Winch Control (ADWC) module, which maintains the position of the draghead (a sand collector mounted on the end of the suction tube) during dredging. This module is responsible for actuating the ship’s winches and controlling a swell compensator that damps oscillations of the boat caused by wave action to ensure that the draghead stays in contact with the ground.

While designing the controller, we developed a physical model of the plant with Simscape and Simscape Multibody™ (Figure 3). Individual team members focused on aspects of the design specific to a particular physical domain. For example, one member worked on mechanical linkages and joints, another on electrical motors and electrical subsystems, and another on hydraulics. The complete plant model spanned all these physical domains and included a model of the vessel itself. As a result, we were able to simulate the complete system to see how all the components worked together as the vessel’s load and center of buoyancy changed. 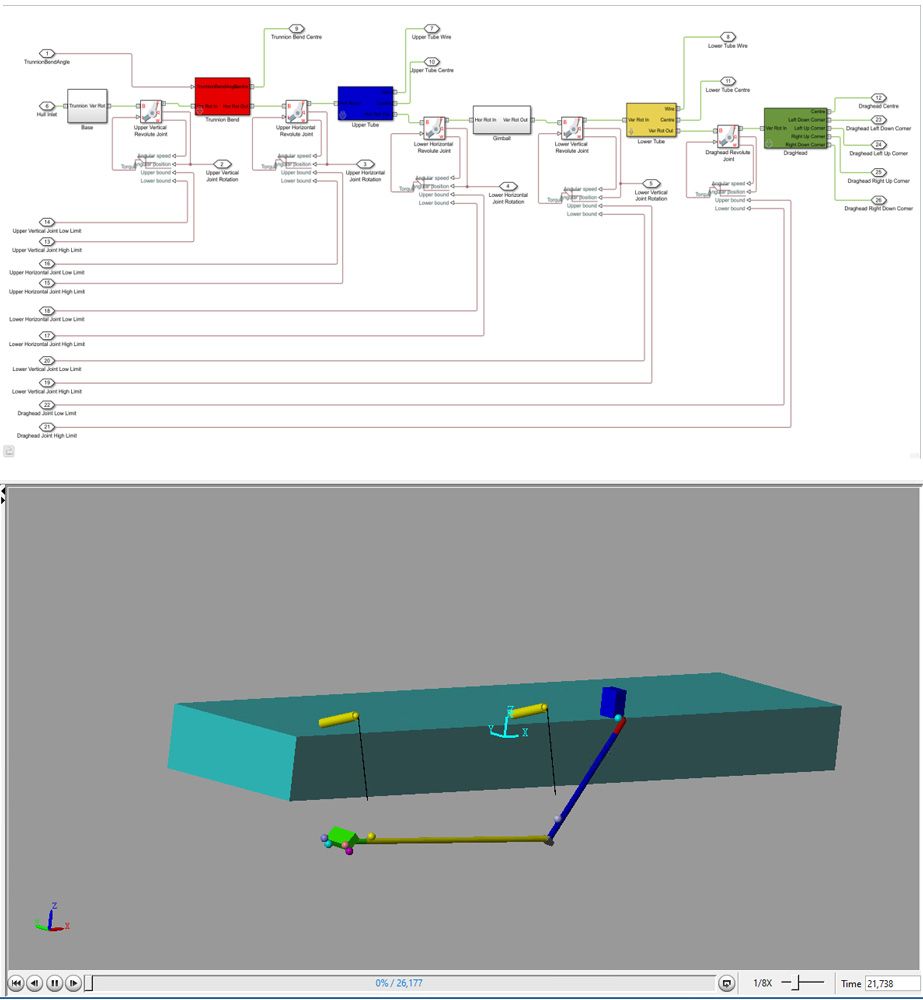 We combined our controller and plant models and ran closed-loop simulations in Simulink to validate the functionality of the DLM, ADWC, and STPM modules.

Having validated the control design on the desktop, we moved to real-time HIL testing on the PLC. We generated C code from our controller model and deployed it to a Bachmann M1 PLC, the same hardware that we would later use for production deployment on the vessel. We also converted our Simscape model to C code and deployed it to a Beckhoff CX2040 PLC, which served as a real-time simulator in HIL tests. We linked the two PLCs, enabling the controller and plant models to exchange sensor readings and actuation commands in real time (Figure 4). We used this setup to test the controller under a variety of operating conditions, including many that would be difficult or dangerous to test on a real ship. 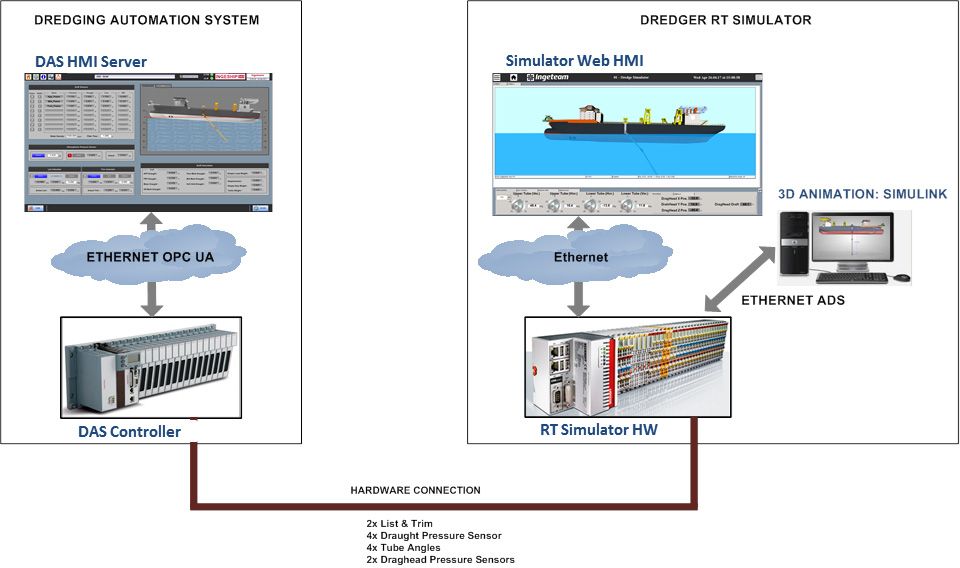 We created a 3D animation of the vessel that enabled us to view the dynamic behavior of the vessel and the suction tube during HIL tests. We used the HIL setup, complete with animation, to demonstrate the control design to our customer (Figure 5). During the day-long demonstration, we triggered faults and subjected the simulated ship and suction tube to extreme conditions to show how the controller responded. Based on the successful demonstration, the customer gave us approval to proceed with the production design.

Figure 5. HIL testing setup with 3D animation of the dredger.

Virtual Commissioning with a Digital Twin

The digital twin enabled Ingeteam to complete commissioning ahead of schedule, and the control system is now in operation on three vessels. We are currently using Model-Based Design and PLC-based HIL testing with a digital twin to accelerate development of a control system for a heavy-lift crane vessel.