How to use polyfit to get the difference out of two functions?

Stelios Fanourakis 2019 年 4 月 20 日
⋮
コメント済み: Stelios Fanourakis 2019 年 4 月 24 日
採用された回答: Walter Roberson
Hi
I have two datasets (X,Y). For every value of Y that corresponds to a value of X.
I am thinking of applying a polyfit command to get the best curve fitting for the data, and as a result I will come up with a function (slope+intercept).
How do I find the difference between those two functions? What command do I apply to subtract Function A from Function B?

⋮
@Walter. The datasets are curves. If I plot them in excel and apply a polynomial curve fitting of high degree (e.g. 6) then I get the best line fit and a function. I need to get the same function in Matlab. And then subtract one function from another since the datasets are very close each other, to find their difference. How do I do that?

⋮
@Walter.
I guess this is the correct answer but I need a few clarifications.
The two datasets are comprised a series of X data that corresponds to a series of Y data.
I guess the polyfit command would be like
P1 = polyfit((1:length(X1)).', Y1(:), 6);
P2 = polyfit((1:length(X2).',Y2(:),6);
Pd = polyval(P1, 1:length(X)) - polyval(P2, 1:length(X2))
Am I doing something wrong? I need to estimate numerically the difference between two curves.
Can you also remind me what the ' means in programming?

⋮
Is it correct as stated?

⋮
You can say Y are rows and X columns. For every Y is a X and the same applies at both data sets

⋮
@Walter
I don't know what to do.
Even if I assign the same number of cells to all variables x1,y1,x2,y2 still I get the error
Error using polyfit (line 44)
X and Y vectors must be the same size.
Error in curvefitdif (line 19)
P1 = polyfit(x1(:,1), y1(1,:), 6);
And it especially stucks at the specific line of code, where it shouldn't since I have made both x1 and y1 same size.
Is it something wrong with my Matlab?

⋮
I found the error of Nan but now I get the new error
Error using horzcat
Dimensions of arrays being concatenated are not consistent.
Error in curvefitdif (line 16)
allX = unique([x1{:,:}, x2{:,:}]);

⋮
Yes thank you so much Walter. Now I see a result. I used to come up with various errors of brackets and columns that's why I experimented a bit but now it is sorted.
I am trying to plot everything now in one graph. How to plot P1, P2 and their difference together in one plot?
Actually, when I try to use those lines
Pd = polyval(P1, allX) - polyval(P2, allX)
P11 = polyval(P1, allX)
P22 = polyval(P2, allX)
hold on
plot(allX, Pd)
plot(allX, P11)
plot(allX, P22)
I get three plots. But one of the datasets is not correct

⋮
Finally, I think it's great. Thank you very much Walter. I'll come back if I notice something not right.

⋮
Dang, I posted complete code for this, but somehow it did not get saved! 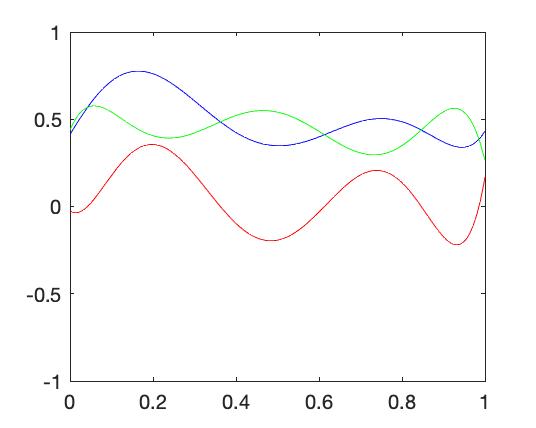 Is there a reason why you refuse to believe me? You can evaluate that difference function at any point.

⋮
So effectively, your question has nothing to do with your real problem?
Problem 1: Read the data in. xlsread should suffice.
Problem 2: Extract the data from a table. There is no need to create a table. See problem 1.
Problem 3: Apply polyfit. Um, use polyfit? Read the help for polyfit. Or read my comment.
Problem 4: Subtracting the polynomials. I told you how to do that.
You are making this wildly overly complex.

⋮
It has to do with P2. I don;t know why it gives NaN. I am trying to find out at the moment

⋮
Yours John was also good but I couldn't make the fplots work correctly. I was getting some results, but they were almost linearly, which in my case the data are curves.

⋮
If pdiff gives a result of NaN, then one or both of the polynomials was already garbage. LOOK at the cofficients that you got from those two fits.
NaN can only ever result as a subtraction by things like inf - inf, or anything plus a NaN. So the problem lies in your original fits.

⋮
Actually, the problem lies where I use readtable and import the columns from excel.
They are imported as NaNs

Stelios Fanourakis 2019 年 4 月 21 日
⋮
Actually, both datasets are high degree polynomials e.g 6. They are almost identical and need to find their difference. How do I do that in Matlab?

⋮
Did I not say just how to do that in my answer?