Change from wavplay to audioplayer

Walter Roberson 2019 年 2 月 24 日
⋮
編集済み: Walter Roberson 2019 年 2 月 25 日
p = audioplayer(y, Fs);
playblocking(p);
Note that using playblocking() is not exactly the same as what you have now. Your current code loops back around and starts playing the new y for the next i while the first wavplay is still playing, and leaves up to floor(Nb) sounds playing simultaneously when the function returns. It is possible to emulate that behaviour, but is it really what you want?

⋮
how will that affect playing of the sound file ?

⋮
Ah, I did not read through the definition of 'async' for the old wavplay(): it did not permit two players to play at the same time.
The difference between what I wrote with playblocking() compared to vavplay() with the 'async' call, is that with the code you have now, if you ran it on a system old enough to have wavplay, then when the last iteration of for i was being executed, the old code would return out of equalizer_play(), and therefore out of the play_Callback function, giving the user back control of the user interface while that very last iteration was being played, but not before that last for i iteration. With playblocking() that I suggest, then instead the control being returned to the user while that last sound is playing, control would not return to the user until after that last sound was played. It looks to me as if that would be a difference of 2 seconds.

⋮
actually it works , but the problem is that it has pauses of silence , the song is not streaming as normal instead it works for 3 seconds take a pause of silence for 1/2 seconds and then continue and so on
What is it ?

⋮
Would it improve anything if i put audioplayer() out of the loop ?
and where should i put it if so ? 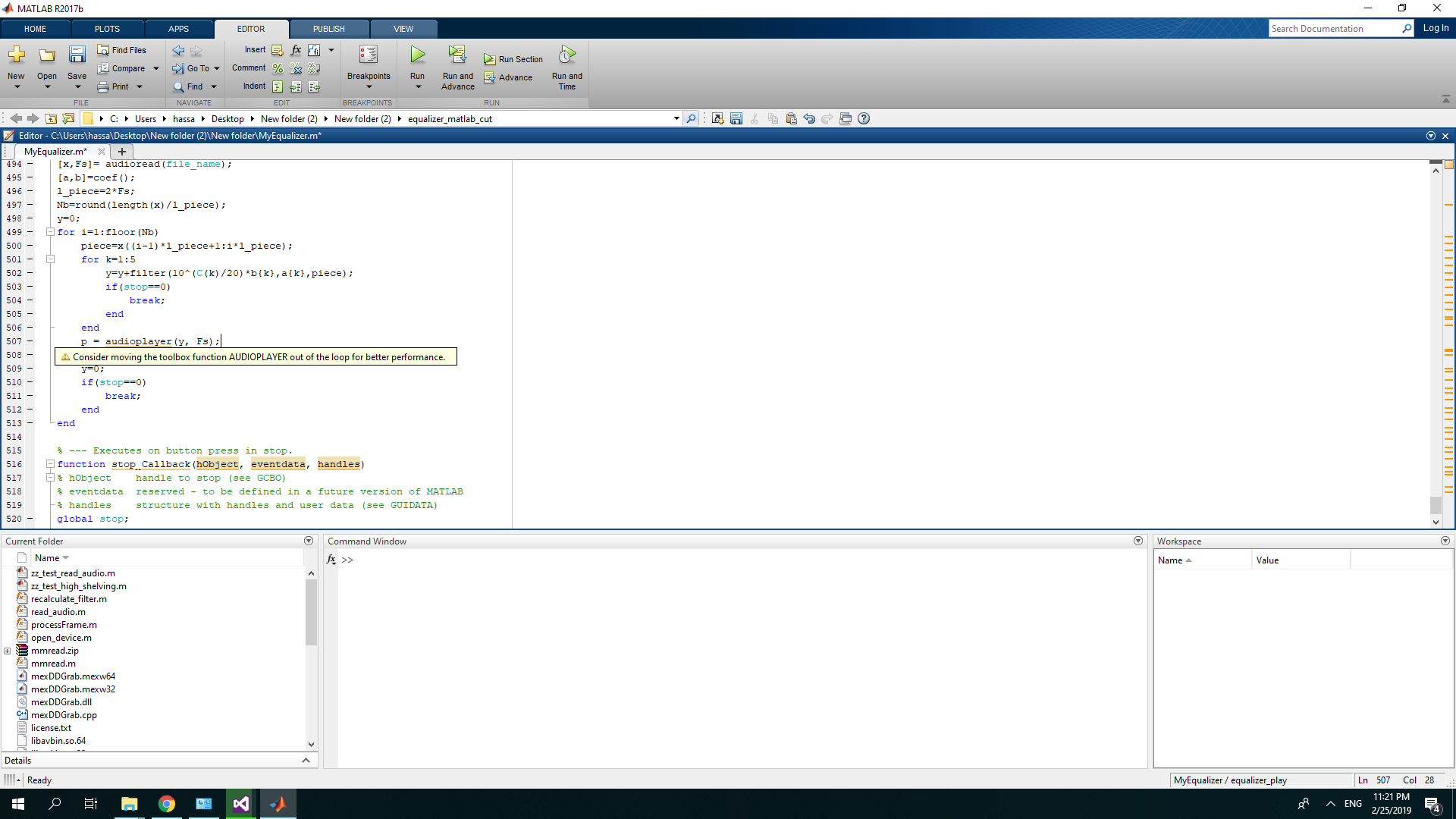 ⋮
The analyzer is not noticing that you are playing different sounds each time.
Any one audioplayer object is for playing one sound, possibly positioning to different parts of it (though that is not simple.) To play a different sound you need a different audioplayer object. Creation and deletion of those objects is a bit slow. The only way to get streaming would be to have the objects prepared in advance and have the stopfcn of one start the playing of another.
If you want streaming audio then you should give up compatibility with wavplay(), which never supported streaming audio. You should instead switch to the tools available through the Audio System Toolbox: those tools permit you to queue samples to be played while playing is going on.

⋮
will that possible to be done through my code ?
if it's can u show some code examples ?