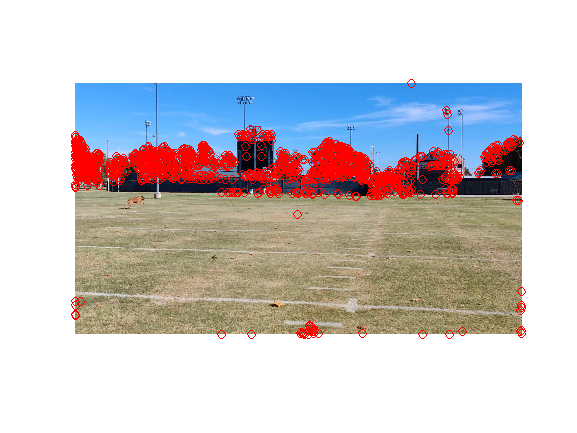 As you can see from the above and the title of the question, I am currently working on establishing my ground truth for my tracking model but determing the position (in x and y coordinates) of my dog. To estimate it I would like to use the centroid of my desired object of tracking (i.e dog) and so I would like to find the centroid of the object in image (a frame of the video), but the as you can see I am getting hundreds of centroids and non on the actual dog. How can I specify a specific region of my image (using regionprops function) to find centroid of my desired object. Thanks

Image Analyst 2022 年 11 月 25 日
⋮
That's just because you're doing an intensity threshold. You'd need to do some more sophisticated segmentation. Perhaps you need to subtract old frames from the current frame, as long as your camera is not moving. Or else define something that uniquely describes the dog.

⋮
This is actually the first frame of my video so there are no previous frames to subtract from. also do my coordinate system changes (x and y) changes when I move the camera (meaning that my reference point, which is the camera) changes with respect to the object)?
Also when you say define something that uniquely defines the dog, can color count? and if so how can I implement it?

⋮
Yes, color can count. Use the Color thresholder app on the Apps tab of the tool ribbon.

⋮
I see, but then how can i get a centroid for that polygon that i can draw inside the color thresholder app? (which is the centroid of my object (dog in this case)?
Thanks

⋮
See my Image Processing Tutorial in my File Exchange:
Image Analyst's File Exchange
That will show you how to get centroids.
But if you're using Color Thresholding, why are you also drawing some region?

⋮
you mean your "image segmentation tutorial"? Becuase when I entered the link you send me earlier it showed me a bunch of tutorials under image processing.
Thanks for the help, and sorry if I am causing you any frustration.

⋮
Yes, my File Exchange:
Image Analyst's File Exchange
has a bunch of demos and tutorials in it. One of them is my Image Processing Tutorial. Have you downloaded and run it yet?

⋮
Are you still there? I told you how to do color segmentation, and how to find the centroid once you have the mask, so does that solve your problem?

⋮
I am still working on it. I don't have much computer vision or image processing experience so I am still trying to dissect your demo code, and so far I am not able to get a blob for the dog, especially in the early frames where his color intensity is similar in brightness to the grass around him

⋮
You have a moving camera in a situation where you have no template image. You want to be able to detect an object that will be moving from the very first frame, before it has even moved.
In order to do that, you need a considerable amount of scene intelligence, such as numerous pictures of playing fields marked up according to whether the various objects in view are movable or immovable, so that when you later present the first image of the video the program can analyze the blobs to figure out which are stationary objects, marking the ones that are not stationary.
But even if you do that, you should expect the algorithm to fail. For example, much of the time, an orange pylon at the edge of the field would be immobile, just marking the boundaries, but it is possible for the pylon to be blown by the wind or to be mounted on something that is moving. Suppose it were a pylon that was moving in the video, which would be something obvious if you compared a few frames... but you expect your code to be able to pick it out on the first frame before you even know whether it is going to be stationary or not.
By expecting it to be able to pick out the dog on the first frame before it has a chance to move, you are effectively asking for a program with the intelligence to detect things that "don't belong" on the field.
Realistic video tracking programs without template images or gigabytes of scene data to analyze from, do not work that way. Instead, they use the first image as a template and look at the second frame relative to the first frame. 3 frames are usually enough to determine moving objects. The program might then go backwards and be able to mark where the moving object was in previous frames -- but the program does not already know from just the first frame which portion will be the moving object.